Hand-waver Boxing Kangaroo 450x300mm (One only) 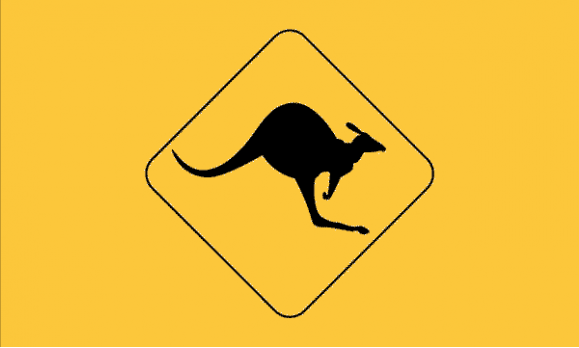 The boxing kangaroo is a national symbol of Australia, frequently seen in popular culture. The symbol is often displayed prominently by Australian spectators at sporting events, such as at cricket, tennis, basketball and football matches, and at the Commonwealth and Olympic Games. The flag is also highly associated with its namesake national rugby league team - the Kangaroos. A distinctive flag featuring the symbol has since been considered "Australia's sporting flag".
The idea of a boxing kangaroo originates from the animal's defensive behavior, in which it will use its smaller forelegs (its "arms") to hold an attacker in place while using the claws on its larger hind legs to try to kick, slash or disembowel them. This stance gives the impression that the kangaroo appears to be "boxing " with its attacker.
The image of the boxing kangaroo has been known since at least 1891, in which a cartoon titled "Jack, the fighting Kangaroo with Professor Lendermann" appeared in a Sydney newspaper. The image was inspired by late 19th century outback travelling shows which featured kangaroos wearing boxing gloves fighting against men. Das Boxende Känguruh, an 1895 German silent film directed by Max Skladanowsky, and an English silent film produced by Birt Acres in 1896 also both featured kangaroos boxing against men, while the American animated shorts The Boxing Kangaroo (1920), Mickey's Kangaroo (1935) and Pop 'Im Pop! (1949) helped establish the concept of a boxing kangaroo as a popular culture cliché. The 1978 Hollywood movie Matilda, which starred Elliott Gould and Robert Mitchum, featured a boxing kangaroo that was exploited for prize fighting.
During World War II the boxing kangaroo became a national symbol in the Royal Australian Air Force, when during 1941 boxing kangaroos were stencilled on Australian fighter aircraft of the No. 21 Squadron RAAF based in Singapore and Malaya to differentiate their aircraft from British planes. The practice soon spread to other units, as well as onto ships in the Royal Australian Navy.

Yellow kangaroo wearing red boxing gloves, standing in fighting position alongside the southern cross and the word Australia, both in yellow. Background is emerald green.