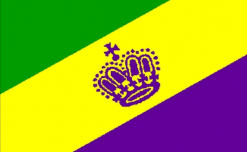 Popular practices on Mardi Gras include wearing masks and costumes, overturning social conventions, dancing, sports competitions, parades, debauchery, etc. Similar expressions to Mardi Gras appear in other European languages sharing the Christian tradition, as it is associated with the religious requirement for confession before Lent begins. In many areas, the term "Mardi Gras" has come to mean the whole period of activity related to the celebratory events, beyond just the single day. In some American cities, it is now called "Mardi Gras Day".
The festival season varies from city to city, as some traditions, such as the one in New Orleans, Louisiana, consider Mardi Gras to stretch the entire period from Twelfth Night (the last night of Christmas which begins Epiphany) to Ash Wednesday. Others treat the final three-day period before Ash Wednesday as the Mardi Gras. In Mobile, Alabama, Mardi Gras-associated social events begin in November, followed by mystic society balls on Thanksgiving, then New Year's Eve, followed by parades and balls in January and February, celebrating up to midnight before Ash Wednesday. In earlier times, parades were held on New Year's Day. Other cities famous for Mardi Gras celebrations include Rio de Janeiro; Barranquilla, Colombia; George Town, Cayman Islands; Port of Spain, Trinidad and Tobago; Quebec City, Canada; Mazatlán, and Sinaloa, Mexico
Carnival is an important celebration in Anglican and Catholic European nations. In the United Kingdom and Ireland, the week before Ash Wednesday is called "shrovetide", ending on Shrove Tuesday. It has its popular celebratory aspects, as well. Pancakes are a traditional food. Pancakes and related fried breads or pastries made with sugar, fat, and eggs are also traditionally consumed at this time in many parts of Latin America and the Caribbean.
In Sydney, a parade is held, known as the Sydney Gay and Lesbian Mardi Gras, or simply "Mardi Gras". The event started as an attempt to bring about public acceptance of homosexuality and as a retaliation to police brutality in the 1970s. Reference: Wikipedia