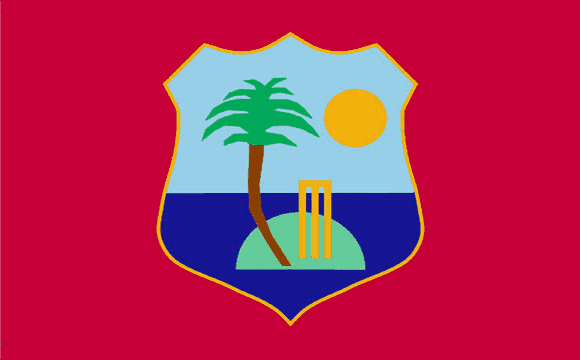 The West Indian cricket team, also known as the West Indies or, colloquially, the Windies, is a multi-national cricket team representing a sporting confederation of 15 mainly English-speaking Caribbean countries, British dependencies and non-British dependencies.
From the mid-1970s to the early 1990s, the West Indies team was one of the strongest in the world in both Test and One Day International cricket. A number of cricketers considered among the best in the world have hailed from the West Indies: Sir Garfield Sobers, Lance Gibbs, Gordon Greenidge, George Headley, Brian Lara, Clive Lloyd, Malcolm Marshall, Andy Roberts, Alvin Kallicharran, Rohan Kanhai, Sir Frank Worrell, Clyde Walcott, Everton Weekes, Curtly Ambrose, Michael Holding, Courtney Walsh, Joel Garner and Sir Viv Richards have all been inducted into the ICC Hall of Fame.[1]
The West Indies have won the ICC Cricket World Cup twice, in 1975 and 1979, the ICC World Twenty20 once, in 2012, the ICC Champions Trophy once, in 2004, and were runners up in the Under 19 Cricket World Cup in 2004. The first cricket team to win the World Cup twice, their record was surpassed by four World Cup wins by Australia, and equaled by India in 2011. West Indies are also the first team to win back to back World Cups, since surpassed by three consecutive World Cup wins by Australia (1999, 2003 and 2007). West Indies is the first team to appear in three consecutive World Cup finals (1975, 1979 and 1983), since surpassed by four consecutive World Cup finals appearances by Australia (1996, 1999, 2003 and 2007).
reference: Wikipedia