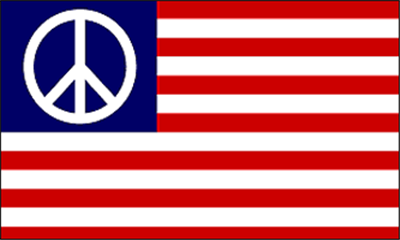 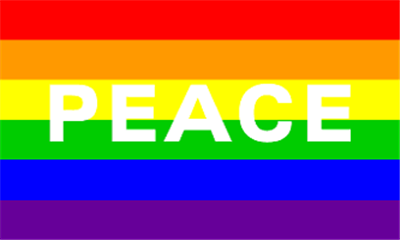 Yin and Yang on black 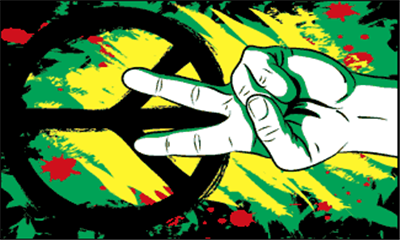 The internationally known symbol for peace was originally designed in 1958 for the British nuclear disarmament movement by Gerald Holtom. Holtom, an artist and designer, made it for a march from Trafalgar Square, London to the Atomic Weapons Research Establishment at Aldermaston in England, organised by the Direct Action Committee to take place in April and supported by the Campaign for Nuclear Disarmament (CND). Holtom's design was adapted by Eric Austen (1922–1999) to ceramic lapel badges. The original design is in the Peace Museum in Bradford, England.
The symbol is a combination of the semaphore signals for the letters "N" and "D," standing for "nuclear disarmament". In semaphore the letter "N" is formed by a person holding two flags in an inverted "V," and the letter "D" is formed by holding one flag pointed straight up and the other pointed straight down. Superimposing these two signs forms the shape of the centre of the peace symbol. Holtom later wrote to Hugh Brock, editor of Peace News, explaining the genesis of his idea:
"I was in despair. Deep despair. I drew myself: the representative of an individual in despair, with hands palm outstretched outwards and downwards in the manner of Goya's peasant before the firing squad. I formalised the drawing into a line and put a circle round it."
Ken Kolsbun, a correspondent of Holtom's, says that the designer came to regret the symbolism of despair, as he felt that peace was something to be celebrated and wanted the symbol to be inverted. Eric Austen is said to have "discovered that the 'gesture of despair' motif had long been associated with 'the death of man', and the circle with 'the unborn child',". Some time later, Peggy Duff, general secretary of CND between 1958 and 1967, repeated this interpretation in an interview with a US newspaper, saying that the inside of the symbol was a "runic symbol for death of man" and the circle the "symbol for the unborn child".
Semaphore "N" and "D" The symbol became the badge of CND and wearing it became a sign of support for the campaign urging British unilateral nuclear disarmament. An account of CND's early history described the image as "a visual adhesive to bind the [Aldermaston] March and later the whole Campaign together ... probably the most powerful, memorable and adaptable image ever designed for a secular cause."
Embodying the national debate over U.S. involvement in the Vietnam War, a U.S. soldier in Vietnam wears amulets, one depicting the peace symbol and another the Buddhist swastika. Not patented or restricted, the symbol spread beyond CND and was adopted by the wider disarmament and anti-war movements. It became widely known in the United States in 1958 when Albert Bigelow, a pacifist protester, sailed a small boat fitted with the CND banner into the vicinity of a nuclear test. Buttons with the symbol were imported into the United States in 1960 by Philip Altbach, a freshman at the University of Chicago. A