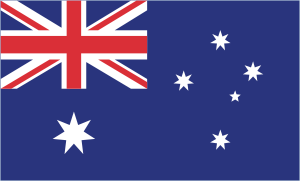 Before Federation the Australian colonies made use of the flags of Great Britain - the Union Flag and the Red, White and Blue Ensigns. On 1 January 1901 the six colonies agreed to unite the name of "Commonwealth of Australia" and our people became one nation.
Shortly before the opening of the first Parliament it was decided to hold a worldwide competition to obtain designs for two Australian flags - one for official and naval purposes and the other for the Merchant Navy service. The competition was conducted in conjunction with a newspaper, The Review of Reviews. On 3 September 1901 the designs were displayed in the Exhibition Building, Melbourne. Over 30,000 designs were submitted and five were selected as being of equal merit. The prize of £200 (£75 from the Commonwealth, £75 from The Review of Reviews and £50 from the Havelock Tobacco Company) was divided among five persons: Mrs. A. Dorrington or Perth, Mr. E.J. Nuttall of Melbourne, Mr. Ivor Evans of Melbourne, Mr. Leslie Hawkins of Sydney and Mr. W. Stevens of Auckland.
On the day the winners were announced by the then Prime Minister, Mr. E. Barton, a large flag embodying the designs was flown on the Exhibition Building, Melbourne. Photographs of the day show it as having a design quite similar to that officially proclaimed later. Under the Union of the British Blue Ensign was a large white star with six points representing the six States. In the fly of the flag there were five white stars representing the Southern Cross.
In February 1903 it was announced in the Commonwealth Gazette that King Edward VII had approved a design for the Flag of Australia, and also one for the Flag of the Merchant Navy. Both designs were shown in colour plates in the Gazette.
In 1908 the Government decided that a seven-pointed star, symbolical of the six States and the Territories, should replace the large six-pointed star shown in the originals design of the Flag - to represent the Territories and to conform with the star in the Crest of the Coat of Arms granted that year.
For many years the Commonwealth Blue Ensign was regarded as an official flag, and its use on land was restricted to government establishments. The flying of the Ensign of land by an individuals and non-government bodies was discouraged, although in 1941 the Prime Minister, Mr. R.G. Menzies, directed that there should be no restriction on the flying of the flag. In February 1947, the Prime Minister, Mr. J.B. Chifley, issued a press statement encouraging the application of the directive given earlier by Mr. Menzies that there should be no restriction on the flying of the Commonwealth Blue Ensign on shore. Its greater use on public buildings, by schools and private citizens was not only permitted but would be appreciated provided it was flown in a manner appropriate to the use of a national emblem. Australian merchant vessels were to continue to fly the Commonwealth Red Ensign.
Nevertheless, it had not been clearly established that any particular flag was the "National Flag" until 1951 when King George VI approved a recommendation by the Government that the Commonwealth Blue Ensign be adopted as the Australian Flag.
The Flags Act 1953 (Act No. 1 of 1954) was passed by the Commonwealth Parliament in November 1953 proclaiming definitively the Australian Blue Ensign as the National Flag and the Australian Red Ensign as the proper colours for merchant ships registered in Australian. Act No 58 of 1954 corrected a slight error concerning the outer diameter of the large star in the design of the Australian National Flag. The correct terms now for these flags are the "Australian National Flag" and the "Australian Red Ensign". Act No. of 1981 removed reference to the Navigation Act 1912 in section 4(1) and moved the description of the Australian Red Ensign from section 4(2) to a revised First Schedule.
By a Proclamation under section 5 of the Flags Act 1953 the Governor-General appointed the Australian White Ensign to be the ensign of the Royal Australian Navy. This was announced in the Commonwealth of Australia Gazette No.18 of 1 March 1967.
By a Proclamation under section 5 of the Flags Act 1953 the Governor-General appointed the Royal Australian Air Force Ensign to be the ensign of the Royal Australian Air Force. This was announced in the Commonwealth of Australia Gazette nos. 89 of 6 May 1982.
The Australian Government has a web site 'Australian National Flag" with information about flying the Australian Flag.
(http://www.itsanhonour.gov.au/symbols/flag.cfm)
Also available at the Australian Government Flying the Flag website is an offer to join an email subscription list which will inform you about important days and the use of the flag on that day.
(http://www.itsanhonour.gov.au/symbols/announcements.cfm)